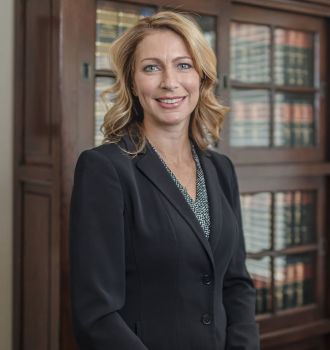 Joanna Mastny began her legal career in 2006, when she joined the United States Navy Judge Advocate General’s Corps (JAG) after graduating from law school in San Antonio, Texas. She served on active duty for six years before completing her active service here at Fort Gordon and transitioning into the U.S. Navy Reserves, where she continues to hold a commission as a Lieutenant Commander.

After practicing family law in her hometown of Houston, Texas, for eighteen months, Joanna and her family returned to the Augusta area in 2014 to permanently settle. Joanna prosecuted criminal cases as an Assistant District Attorney for the Augusta Judicial Circuit until 2018, during which time she prosecuted hundreds of misdemeanor and felony cases.

"I'm thankful for the opportunity to help individuals and families through
the toughest parts of their lives."

Joanna joined Durham Bray Law Firm as an associate attorney in July 2018. She handles all of the firm’s family law cases, employing a blend of compassion and strength to help her clients through their most difficult times. Joanna also uses the expertise gained as a prosecutor to defend clients in criminal cases.

Joanna resides in Grovetown, Georgia, with her husband, three children, and their spaniel puppy.