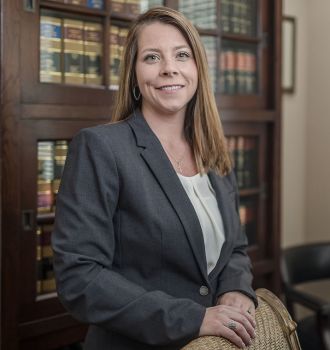 Melissa Bray is a local attorney who was born and raised in Columbia County, Georgia. In 2007, she began her legal career as a prosecutor spending several years as an Assistant Solicitor General and as an Assistant District Attorney, where she gained valuable trial experience trying over fifty jury trials during her time as a prosecutor.

In 2015, Melissa joined Durham Law Firm as an associate, and became Partner in the Firm two years later in 2017. On February 1, 2021, Melissa became named Partner and the Firm changed its name to Durham Bray Law Firm.

"The client will always come first,
every single time."

Melissa is a seasoned trial attorney who fiercely advocates in getting the largest award possible for her clients in personal injury cases, varying from tractor trailer/auto crashes, dangers on properties, to medical malpractice cases. She has settled hundreds of cases for citizens who were injured by another person’s or corporation's carelessness and has obtained millions for her clients. Melissa is also extremely talented in protecting those accused of crimes.

Melissa is a Leader in Student Ministry at Stevens Creek Church and is dedicated to leading youth toward Christ. Melissa resides in Evans, Georgia, with her husband, Michael, and daughter, Katherine, and her German Sheppard, Sadie.